Apple’s programming language Swift includes several features commonly used in functional programming but unheard of in more mainstream languages. This blog post explores the lesser-known feature known as curried functions. I first encountered currying when studying the functional language Haskell, which is fundamentally based on function currying. Swift makes function currying available but a developer is never required to make use of it. It’s just another tool in a Swift developer’s toolbox.

Here is a simple example showing the similarities and differences between using default parameter values and curried functions. The following code sample shows how to append a separator to the end of a string. The first function in the code listing uses a default value of “\n” for the separator parameter. Later in the code a different separator, whitespace, is used instead of a newline. 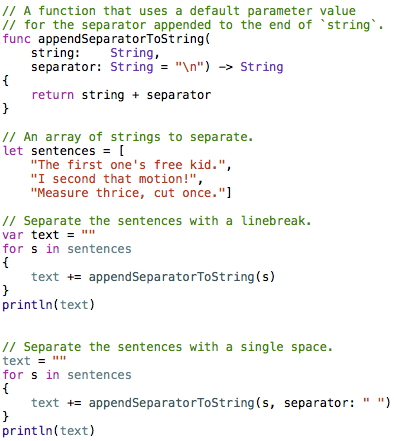 The output created by running this code is shown below:

This example is trivial but it shows the essential concept of function currying in action. Binding some of a function’s parameters to create a simpler function makes it is possible to restrict knowledge of what parameter values should be used to only the places in an application that should have that knowledge. This can enable classes to be selectively ignorant about certain aspects of how a function should be used, and reduce coupling between collaborating objects.

Josh Smith is a musician at heart, and a software developer by obsession. He lives in Arizona, plays classical music on the piano, jazz on the guitar, and enjoys brutally long rides on his bicycle. He has a wonderful wife & son and thinks that, in general, life is good.
View all posts by Josh Smith →
This entry was posted in Swift and tagged Currying, Swift. Bookmark the permalink.

19 Responses to Curried Functions in Swift